The problem of time seems to be central to Plato’s philosophy. Since forms are eternal while the world and everything within it are temporal, the differentiation between time and eternity lies at the heart of his ontology. Despite the crucial importance of the concepts of time and eternity for Plato’s philosophy, not until the Timaeus, one of the latest dialogues in the Corpus, does he offer a more or less complete analysis of these concepts. Following the famous passage of the dialogue (Tim. 37d1–38b5), we can describe eternity as an absolutely changeless and motionless state of being “abiding in unity” and “only is is appropriately said of it.” Time presupposes change and motion, it is “moving according to number” and can be described in terms of “was and will be.” These elegant definitions (even though they are far from unambiguous since Plato calls time “an eternal image” (αἰώνιος εἰκών – Tim. 37d7) of eternity) grounds the conventional for the later European philosophical tradition dichotomy of ‘time and eternity.’

However, the dichotomy of ‘time and eternity,’ while Plato is credited as its founding father, does not fit Timaeus’s ontology well. In the dialogue, the third ontological level is introduced, the receptacle (to use it as an ‘umbrella term’ describing the object of the second Timaeus’ discourse (Tim. 47е–69а)), which is sharply distinct from ontological levels of the forms and of the things. Surprisingly, the question of the receptacle’s temporal status was hardly discussed explicitly in the research literature. By default, Plato’s receptacle is considered to be eternal. According to Timaeus’s story, not only the paradigm but also the receptacle exists before the organization of the cosmos (cf.: Tim. 30a2–6; 47e4–48a7; 68e1–69a5). Since time arises only with the creation of the cosmos (Tim. 38b6ff.), it means that the receptacle is outside of time. Following the conventional dichotomy of time and eternity, the timelessness of the receptacle leads to the conclusion that it is eternal.

The traditional dichotomy of time and eternity fits well the dyadic ontology of the Abrahamic theological tradition, where we have (i) temporal profane world and (ii) its eternal divine creator. Unlike this tradition, the demiurge in the Timaeus does not create the world ex nihilo but arranges it from the previously unformed disorder depended on the intelligible principle. Thus, we have a triadic ontology, with three different ontological levels: (i) the eternal paradigm, (ii) the temporal cosmos, and (iii) the receptacle. Since the eternity for Plato is the key and specific characteristic of the forms, it is doubtful that the receptacle, the metaphysical antonym of the forms, is eternal. At least in the sense of eternity that characterizes Plato’s forms. To distinguish the eternity of the paradigm from the ‘eternity’ of the receptacle, I propose to use the concept of instantaneousness to designate the latter. The choice of the term is not accidental and refers to “the instant” (τὸ ἐξαίφνης) introduced by Plato in the Parmenides (Parm. 156d2–157b5). Thus, in my talk I would like to introduce and discuss the instantaneousness of the receptacle as the third temporal status alongside time and eternity. I argue that eternity as a paradigm for time guarantees its stability and perfection, while instantaneousness as a necessary condition for time stipulates its changeability and incompleteness. 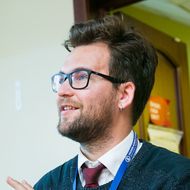